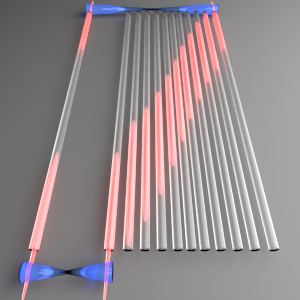 In an international collaboration between the Quantum Photonics Laboratory at RMIT, the Politecnico di Milano and the South University of Science and Technology of China, we have demonstrated, for the first time the perfect state transfer of an entangled quantum bit (qubit) on an integrated photonic device.

The ability of information transfer is at the heart of every information processing system, from global satellite communication to biological neural networks. Likewise, quantum technologies require high fidelity routing of quantum information between different locations of a quantum processor and quantum communication nodes. Due to the long-standing challenge of preserving extremely fragile quantum correlation, despite numerous theoretical proposals, to date, the perfect state transfer protocol has not been experimentally realized on quantum bits of information. In this work we report the first demonstration of perfect state transfer protocol.

Using the state-of-the-art three-dimensional direct-write waveguide technology, we fabricated an integrated waveguide array with a specific design, showing the capability of high fidelity transfer of quantum states.
We anticipate that our realisation of the perfect state transfer protocol has direct applications in many areas, including quantum transport, quantum simulation, entanglement preparation and distribution, and qubit interconnection for quantum computation. These applications may induce fundamental changes in the way we design the infrastructure of the next-generation quantum information processing devices, saving more space and allowing more automation.

Congratulations to Akib for presenting at the FameLab NSW semi-final

Next up, Akib Karim from @RMIT introduces us to quantum field theory and asks them to do a Mexican wave! ?? #FameLab pic.twitter.com/j6I1lTptrR

Many congratulations to our students who have been awarded several Scholarships and Prizes:

Meeting of Italian Scientists Down Under 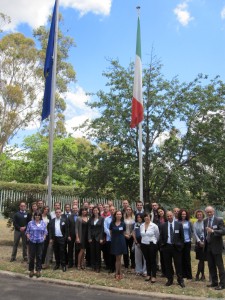 On 27-28 November 2014, the Italian Embassy held a meeting of researchers in the science and technology area, of Italian origin.